A few weeks ago, I was invited to write for a special year-end newsletter from TED where they ask TED speakers to write about their favorite talks. That recommendation would then be sent out to several million people who are on the mailing list. What an cool opportunity! There are so many great talks that I would love to share, I hope they invite me back next year!

After a good bit of thought, I decided to write about Curtis “Wall Street” Carroll’s “How I learned to read — and trade stocks — from prison.” To borrow from Good Will Hunting, it will blow your hair back. 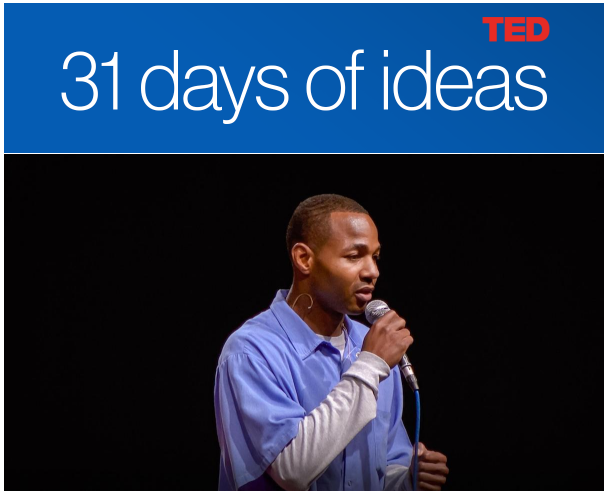 31 Days of Ideas – Cultivate your Superpowers

It won’t take but a few seconds to realize that there’s something different about Curtis “Wall Street” Carroll’s TED Talk. It might be that he’s holding a microphone in his hand. Or maybe it’s the very plain blue shirt he’s wearing. Or perhaps it’s his cadence of speaking. Once you notice it, you start to wonder why this talk looks different from most. When your eye catches “Recorded at TEDxSanQuentin,” it becomes clear. Wall Street is giving this talk from within the walls of one of America’s most storied prisons, where he’s serving a 54-to-life sentence for robbery and murder.

There’s so much insight packed into this talk, I’m begging you to watch it. Wall Street artfully reveals glimpses of living inside a state prison — and the life circumstances that put him there. His powerful views on the dangers of financial illiteracy and emotional relationships with money are wise even when measured against the high standards of financial professionals. In a world starving for role models, Wall Street demonstrates what happens when we’re given a chance to cultivate the superpowers that live inside us.

We commonly see the TED stage as a place where brilliant, powerful and accomplished people share ideas that will play a role in shaping the future. Wall Street’s talk is a powerful reminder that ideas worth spreading can come from all walks of life. As we think about him and his fellow inmates, we’re invited to remember that the future will affect everyone — and that the ideas that will shape it can come from anywhere.